“A very rewarding line down the the west face of Francis Peak. ”

Francis Peak itself is a restricted area. You can, however, descent from its immediate south or north shoulders.

This is perhaps the most interesting way to drop into Bair Canyon when considering all possible ways one could do such a thing from its south ridge, north ridge, and the GWT (Great Western Trail) that connects them along the main spine of the Wasatch mountain range. It's also one of the steepest, and holds the best snow due to its aspect and elevation.

The top of the run is nice and flat where the Francis Peak road meets the "Restricted Area" sign just before leading up to the salt and pepper shakers (radar towers) marring the decapitated Francis Peak. There will likely be a lot of wind as was the case when I was there.

Staying true to the fall-line from where you drop in, you'll get funneled into a bit of a chute/choke-point, but there is plenty of room to turn. You just need to negotiate a few bits of rock poking through the snow, then it's all smooth sailing to the bottom.

I did the line as a Spring ski, so here are a few considerations when the avalanche dragon is mainly wet-slides...

First, before doing the line (or any line), you have to consider the exit. How are you going to get out? Once in Bair Canyon, the terrain is a bit complex. There are several terrain traps in the form of gullies, and by the time you reach them, roller balls may be becoming more prevalent.

I exited by linking up with the Bair Canyon trail, but this is probably not the safest option. In hindsight, it would have been better to hike the non-solar aspects back up to the west ridge of Francis Peak (the south ridge of Bair Canyon, known as Wolverine ridge), then go back down the way I came. Alternatively, I re-ascended to the GWT, but on the north side of Francis Peak, then traversed some sketchy solar aspects.

A smarter descent would have been partially along the north ridge of Bair Canyon, dropping down one of its moderately sloped solar aspects to link up with the Bair Canyon trail. You could even follow that ridge down to Eddie's Peak where there is another trail leading to the BST (Bonneville Shoreline Trail.)

Now as for the line itself, it is certainly at prime-for-slide angles near the top, and there are plenty of exposed rocks that, when heated, promote wet-slide instability. Like all Spring ski descents, your timing must be good, and you should shoot for a day when the safe skiing window is large following several freeze/thaw cycles. Too early, and you've got slide-for-life-conditions going down the chute. Too late, and it could wet-slide. I was probably more lucky than anything else. Your observations of the snow on the approach will help you decide whether to go through with it, or abort.

My step-grandfather helped clear the top of Francis Peak before the construction of the bulbous-looking radar tower thingies. He said there were lots of rattle snakes up there. 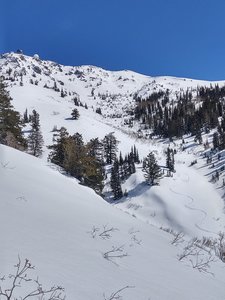 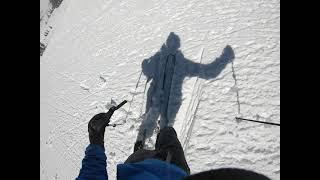 Are You Yeti Yet?