“This trail traverses through the Vardenyats Mountain Pass located in the Gegharkunik province. ”

Throughout the Vardenyats Mountain Pass, the cellular networks operating in Armenia are always available. In case of an emergency, call 911, a service available throughout Armenia.

The Vardenyats Mountain Pass: Ascent begins in the village of Nshkhark. You must walk up the hill from the village, and be sure to take your time to admire the abundance of breathtaking landscape views along the trail. Sakoivar Mountain is one of the highest peaks of the Vardenis mountain range. This ski trail is rather long, which is great for downhill skiing. You'll be able to admire the views of Lake Sevan and Mount Ararat (5,165m) from the top of the summit and much of the way back down.

The best time to visit the area is from January to March. There are bears, wild boars, wolves, red foxes, wild rabbits, rodents, and more in the forests on the slopes of Sakoivar so keep your eyes open as you enjoy the descent.

To reach the above-mentioned ski trail, you need to get to Nshkhark village, in the Gegharkunik province. It is most convenient to travel by taxi. Taxi services are quite affordable throughout Armenia. We recommend taking a cab with a taximeter. Yerevan is 146km away from Nshkhark village, so the road there takes about 2 hr. 11min. and costs between 14,600 – 15,000 AMD (by taxi).

The Silk Road was an ancient network of trade routes connecting China with regions in Asia and Europe. It operated between the 2nd millennium BC, up to the 16th century AD. The Silk Road derives its name from the lucrative Chinese silk trade. Initially silk was the main transferred good. The Road was more than 7 thousand km long, with a subsequent marine path being built much later. These old and new worlds bartered in intermediary countries as well. The Armenian Highland was a bridge between Europe and West Asia. These international trade routes linked Armenia with the Black and Mediterranean sea-ports, crossing the Highlands of Armenia. Commercial transactions were carried out in Iran, Mesopotamia, Egypt, India and China through these routes. Plutarch testifies that Artashat (the capital of Armenia) had a wide range of important trade and economic relations during the 1st century BC. Strabon and other historians of Ancient History write about Armenia’s crucial intermediary role in Roman-Parthian trade relations.

Orbelian’s Caravanserai offered hospitality for travelers who were passing along the highway and the Vardenyats Mountain Pass. Vardenyats is the best preserved mountain pass of all the medieval Armenian passes. Orbelian’s Caravanserai (14th century) in the Vardenyats Mountain Pass, served as an inn for traders passing through the Silk Road in the territory of Armenia. Marco Polo described how Armenians lived in these rugged mountains after he passed through this area. 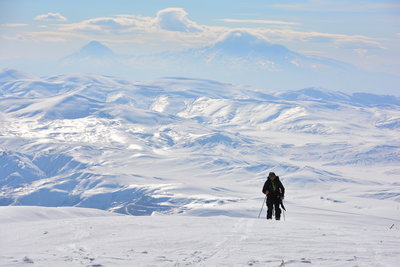 Zangakatun, Not set (Republic of Armenia)