The Ucom and VivaCell-MTS networks are almost always available between Geghadzor village and the Northern Summit of Mount Aragats. In case of emergency, call 911, a service available throughout Armenia.

To reach this run, you need to get to Geghadzor village, in the Aragatsotn province (preferably a day before). Taxi services are quite affordable throughout Armenia. We recommend taking a cab with a functional meter. Head to the start of the North Summit Ascent.

The North Summit of Mount Aragats is in the Aragatsotn province of Armenia. The Mountain has a huge crater, with a 400m depth and 3km diameter, and the ruins of its decayed walls form the four summits of Mount Aragats. The crater is open from the southeast.

Usually, the trail on the North Summit of Aragats takes 8-10 hours (climbing up and down). You need to take a car (Jeep) and begin the trail with an expectation of steep grades toward the summit, soft snow, and marvelous views. The area is usually covered with an abundance of powdered snow.

The best time to access this ski line is February to May. Yerevan is 81km from Geghadzor village, so the trip there takes around 1h 30m and costs 8,500-9,000 AMD by taxi.

On the slopes of Mt. Aragats, animals rest under the thick layers of snow. While descending down the route, you are likely to see traces of animals more often than yours. While skiing in this territory, you’ll probably come across evidence of wolves, foxes, wild rabbits and dogs in rural areas. Birds are also rare in this territory. 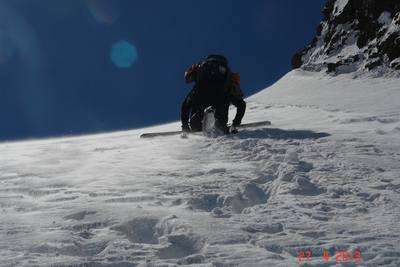 Aparan, Not set (Republic of Armenia)